Allow me to introduce you to Kace, aka Kacey.  Kace is 8 years old and weighs about 90 pounds.  He may look like a senior but I assure you this pup has the energy and strength of a 5 year old.  He has a stuffed animal in his mouth most of the time and is very content laying near you wherever you are.  He will play tug-o-war and fetch.  Once he settles into your home he is a loyal companion.  He likes to be near his human companions.  We do not know much about Kacey's previous life except that his previous owner was diagnosed with dementia and could no longer care for him.  We also know that he had not been to the vet, was not neutered, had no shots, no chip, and had not had his hot spots checked.  Now he is neutered, chipped, vaccinated and he has a clean bill of health.  Cats and Dogs:  Kace is living with 4 cats at the moment.  He is interested in them, but he has shown no signs of aggression toward them. He will chase them if they run.  He has met some of the neighborhood dogs and has sniffed and showed no aggression.  Walks:  He is a strong boy, so he can definitely pull you.  We have been working with him on a transition leash, and he does really well.  He also calms down significantly once he knows the smells of the walk route.  He is not reactive to people or dogs on walks which makes it nice to just focus on walking manners.  He has no trouble with 2 to 3 mile walks.  Crate and Doggie door:  He went into a crate easily and laid down and was very relaxed.  We have not locked him in the crate because it just doesn't seem necessary.  We showed him our doggy door, and he used it without any problem.  But we currently have it closed to keep the cats from going outside.  He is house broken.  Home alone:  Kace will sometimes bark for the first few minutes that you leave him, but after that he's fine.  He will usually lay down and wait for you.  He is not destructive.  The worst thing we have seen him do is carry a shoe into another room.  Car Rides:  He shows no anxiety in the car and rides well.  He gets excited about car rides.  You may need to block him from trying to come into the front seat, but other than that he's great in the car.  Manners:  Kace hardly ever barks.  He will occasionally bark when he sees someone at the front door or in front of the house, but that's about all.  He is not a jumper.  He does not counter surf or beg for food.  He knows SIT well and STAY.  He is learning LAY DOWN.  He will roll over and ask for belly rubs once he knows you.  He will let you take a toy and food away without aggression.  He sleeps through the night on his bed.  Overall he's just a sweet boy. No rescue dog is perfect, not even labs, and Kacey comes with a few imperfections…..just a few.   When he gets very excited, espcially just meeting you, he will try to mount you.  This has been decreasing over the time and rarely happens now.  You can easily stop it by saying OFF!  Kacey has some hot spots on his legs.  He tends to lick these spots causing sores. We are working on stopping him from licking these spots.  They are healing up, but the scars are likely forever.  We do not believe it is allergies but maybe just habit due to anxiety or boredom.  Kace is looking to have the best second half of life, spending his time beside his human companion.  He has a sweet demeanor and his personality has really shined through in the short time we have had him in our home. He is a smart boy and will learn quickly from his new family. If you want to meet this handsome boy please contact me. 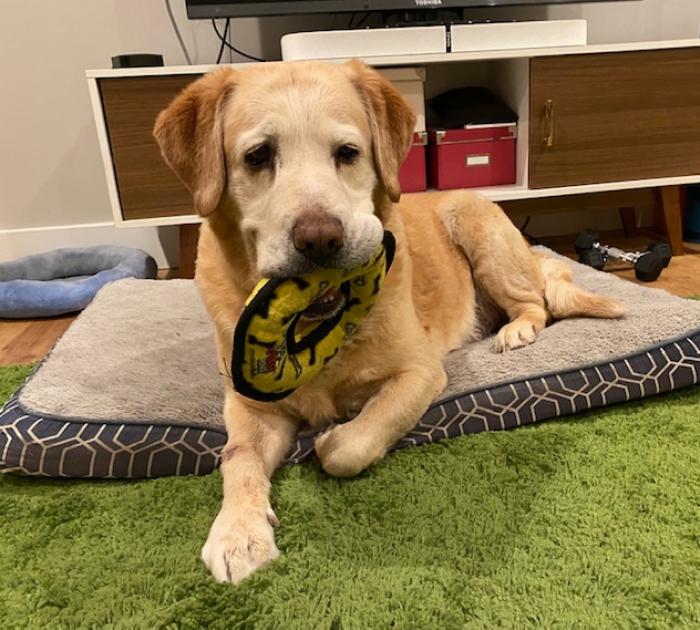 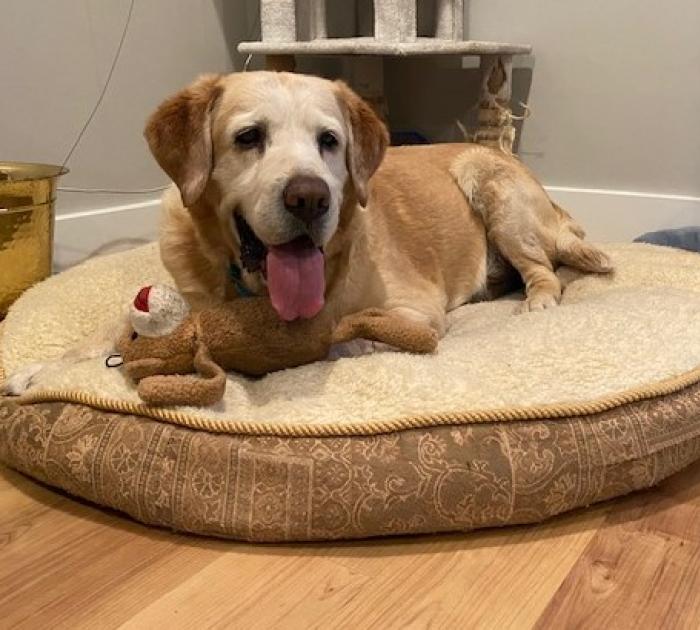